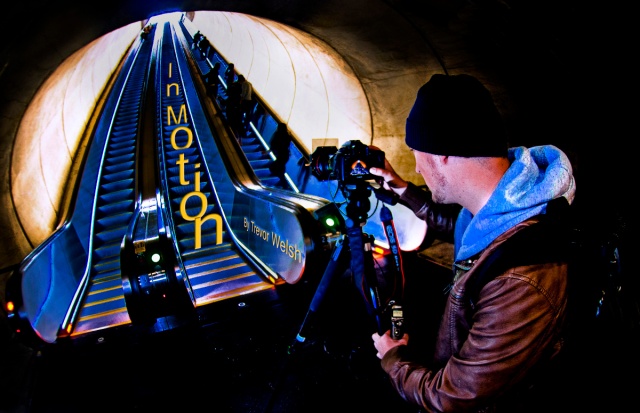 The stage is set. It’s a bright and sunny day with just enough clouds. The sunlight strikes every statue, monument and building with the perfect highlights, mid-tones and shadows. A slight breeze every now and again moves the trees. It’s a sweater-less October weekend in the DuPont district of Washington D.C. and everyone is taking advantage of it. Couples and friends gather to make conversation and drink coffee on outdoor tables at sidewalk bistros. Loners stuff benches next to birds of a feather to read the news or people watch. Countless joggers, please at the easy to breathe air, shuffle through the crowd of city goers. The occasional oversized and excited dog drags their owner across a tree-covered, one-way street. Passing cars with blaring horns; drivers always in a hurry. You can see an open air, topless, tour bus packed to the brim with smiling vacationers, followed by the sound of an ambulance or police siren.

Moving, moving, moving, this city is always moving. Some might see this city as too high-speed, too fast, crowded or obnoxious. For Drew Geraci, this city is a canvas, with people, animals, cars, trees and bushes as the subjects. Drew revels in the opportunity, time and again, to capture this in a unique way.

“My number one passion is time-lapse photography,” Drew says without a doubt. “It’s just something I’ve immersed myself in over the last couple of years.”

Drew says his desire for all things multimedia has taken his photography to another level. His reason for the focus is his love for capturing hours of moments and condensing them into short video clips that almost overloads the viewer with information and images.

“It makes you see things that you don’t normally see, that you can’t get from just a single still image or even video,” he explains. “To me, it just excites me whenever I think about looking at the clouds and watching them roll in, seeing people in the streets or just hanging out somewhere where something is happening that you don’t really see unless you slow it down and then speed it up.”

Without a break, unwavering, Drew spends all of his time dedicated to his trade. Whether in the field, photographing daily D.C. life, or at his computer spending countless hours editing his productions, he lives and breathes his work.

“I don’t have a life, it’s just terrible,” he laughs as he admits it. “But, I love what I do. I want to be able to go out there and create my own products and create myself and not be stifled by someone else’s creativity or leadership.”

Drew spends his days going against the grain; it’s his daily objective to not live with a structure or routine. Every day is different, a new adventure, a new challenge.

Drew doesn’t stagnate and wait for ideas and opportunities to come to him. He’s always seeking, always searching for the next best idea or project to immerse his whole self into in an effort to take it to the next level.

“It’s freakin awesome out there,” Drew exclaimed. “There is so much out there to do and if you go out and try it you might come up with something golden.”

“I just got up and did it,” he said with determination. “Be your own boss, go out there, start a project and be awesome with it. Just freakin’ rock and knock it out of the park.”

Confident and poised, he delves deeper into his work ethic and hunger for more, and very simply explains the importance of initiative.

As he tells a story, about his favorite story, his eyes light up and he cracks a smile. His blue faded stocking cap moves as he crinkles his forehead and raises his eyebrows with every expression change. His mood heightens as the story goes on. He sits up in his chair, and with such enthusiasm, he tells the story. Laughing at his favorite parts, he brings it to the present and makes it feel as if it were happening right now.

“You go into this club and it’s packed, like packed to the brim,” Drew said with emphasis. “I was like, this is going to be awesome, there’s going to be some awesome rocker out on stage with a guitar or something like that. I got in there and it’s these groups of, I’m going to say, misfit people. Its people you never would expect, but they’re in these rock outfits and they’re about to play air guitar. I’m thinking to myself this is the coolest thing I’ve ever seen,” he continues with eagerness. “The energy in this place is just awesome. They go out on stage and they just rock they’re freakin hearts out. Everyone was relating to those moments in the theater, and I wanted to capture that.”

“I tell people that it doesn’t have to be a huge movie star or something grandiose that you’re filming, it could be the smallest thing that gives you the most joy,” Drew explains plainly. “Witnessing that was pretty awesome.”

Drew readies his gear and begins his work capturing the “hours of moments.” He composes the shot. The continuous interval of the shutter releasing over and over again, thousands of times, is music to his ears. Life goes on around him as if he were a statue. As he is approached by admirers, curious individuals and the occasional “hater,” it would take nothing less than a car crash move him from his place. Even when a confrontation occurs between him and a non-camera friendly group of chess players, he does not falter. “This is great,” he says. They press and yell and wave their hands in dismay. He does not move. For it’s a public place, it’s his right to capture this area’s spirit, its way of life. Each place has a story, a living breathing essence. Drew Geraci feels it’s his responsibility to share it to the world in his own, distinctive way.